So, I had a fabulous birthday on Saturday.  My Muse made me cinnamon rolls (from scratch, woohoo) for breakfast.  Check it out: 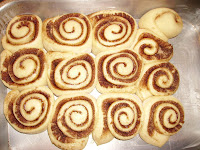 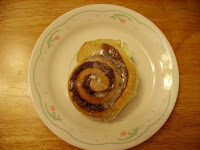 Don't they look yummy??  I promise, they were!
Then he made me a three-layer chocolate, chocolate cake: 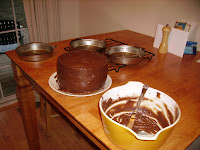 Just the sugar consumption alone that day about killed me, but I enjoyed every bite!!  And there's still a ton of chocolate cake left, so I know what's for dessert tonight and breakfast tomorrow....lol.
We also went bowling, something we've never done together.  It was awesome, even though my arm was killing me after two games (yeah, I know, I'm such a wimp).  It was a lot of fun, though, and we had the bowling alley to ourselves almost the entire time.  It was a little like having rented the place for my birthday without having to pay the huge rental prices!  So, the lesson was go to the bowling alley before lunch on Saturdays and you're pretty much guaranteed the entire place to yourself. :)
For presents, I got an amazing digital camera that I spent most of Sunday playing with.  It's a Nikon D3100 (here's a link to amazon: http://www.amazon.com/Nikon-D3100-Digital-18-55mm-3-5-5-6/dp/B003ZYF3LO).  I got the camera, 2 lenses, a really nice carrying case, and an 8G SDHC card.  I was definitely a happy camper this weekend!
Now it's back to work.  I'll be creating posters and business cards for Celebrate the Book this weekend in Carlisle PA.  I've also got to get back to writing.  It's nice to take a break but it leaves my characters in limbo.  And they tend to get into mischief when they're left in limbo too long...lol.  Adios for now, amigos!
Posted by Wendy Lohr at 9:13 AM