Teaser Tuesdays is a weekly bookish meme, hosted by MizB of Should Be Reading.
Anyone can play along! Just do the following:
•Grab your current read
•Open to a random page
•Share two (2) “teaser” sentences from somewhere on that page
•BE CAREFUL NOT TO INCLUDE SPOILERS! (make sure that what you share doesn’t give too much away! You don’t want to ruin the book for others!)
•Share the title & author, too, so that other TT participants can add the book to their TBR Lists if they like your teasers! 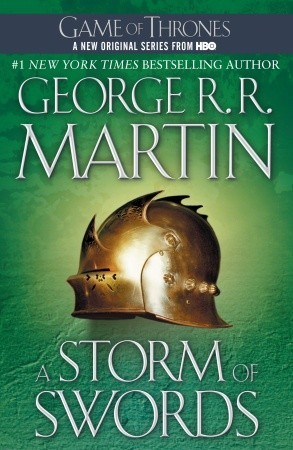 This weeks' teaser comes from A Storm of Swords (A Song of Ice and Fire #3) by George R. R. Martin.  If you haven't read the first two books or seen the HBO series then this passage might be a tad spoilery where Bran's physical condition is concerned:
Bran shook his head.  The day was growing old by then, and long shadows were creeping down the mountainsides to send black fingers through the pines.  If the little crannogman could visit the Isle of Faces, maybe I could too.  All the tales agreed that the green men had strange magic powers.  Maybe they could help him walk again, even turn him into a knight.  They turned the little crannogman into a knight, even if it was only for a day, he thought.  A day would be enough. (p. 343)


Bran Stark is such an amazing character.  I know this particular snippet is much longer than the two sentence rule, but the entire passage resonates so well that I had to share.  I just felt that this passage summed up Bran beautifully.  It shows the predicament he's in, the desires he has, and the maturity that came to him much earlier than it would have if he hadn't been permanently injured.  After everything he's been through, he still clings to his childhood dream of becoming a knight one day and for him, in his early gained wisdom, one day would be enough.


What's your teaser this week?
Leave me a link below and have a great Tuesday!

Email ThisBlogThis!Share to TwitterShare to FacebookShare to Pinterest
Labels: A Song of Ice and Fire, A Storm of Swords, author, Bran Stark, George R. R. Martin, Should Be Reading, Teaser Tuesday