It's A New Year Already?

Where in the world has the last several weeks gone?!  One minute it's Thanksgiving and the next we're in a whole new year! lol  I guess the saying is true that time does fly when you're having fun!

So, I wanted to pop on here since it's been quite a while and give an update on the  writing project I'm working on.  In an earlier post, I mentioned a new writing project that was temporarily going by the name Dark Hollow University Book 1.  Well, since then, the manuscript is finished, I have a cover for the book created, and it has a new title along with a title for the overall series.  Still haven't come up with a synopsis, but as soon as I do, I'll be sure to post it.  As for the manuscript, it's in the final editing stages.

What is the book title?  Vivication  And what is the series title?  Annals of Ellie  Oh, and you'd like to see the cover too?  Not a problem... just keep in mind that the cover is subject to change or at least receive minor tweaks in the coming weeks, so this might not be the final rendition: 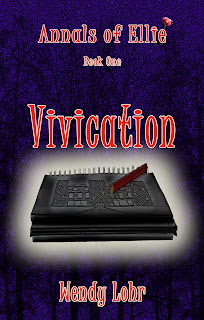 So, now you know what I've been plugging away at since my last post.  I'm hoping that I'll be a bit more diligent in posting on here, but we'll see how this new year progresses.  I think I make a mental resolution every year to post more on this site and sadly, every year, I fall a little short of that goal.

I hope all of you are having a great start to your 2016 and I'll be back on again soon with more updates!