Wow, so I have not been out here in quite some time!  Failure on my part, but I can say that I have been quite busy.

As most of you probably already know, Perspicacity (Annals of Ellie #2) is now available on Kindle, Nook, and in paperback on Amazon and CreateSpace!  Woot!!!  It did not get the release day treatment it should have, but I promise, you just have to read this book and immerse yourselves in Ellie's world to know that it is awesome!  So, if you haven't been introduced to Ellie yet, check out the first book, Vivication.  And then follow it up with Perspicacity.  It will be time well spent!

Next, if you haven't guessed, I've been hard at work on Joja, the fourth book in the Galactic Dynasty series that I co-author with my hubby (aka, my Muse).  We're just a mere chapter or so away from having the manuscript done.  And then it's edits, edits, and more edits... hooray! (Channeling my inner Archer on that hooray bit... if you haven't seen the show, it's hilarious!)  Anywho, we do have a cover now and it's getting its cover reveal today... so, here it is, peeps: 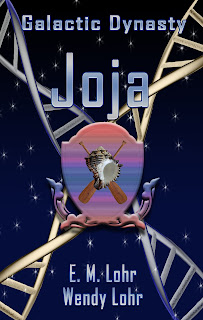 Once Joja is out to the masses, I'll be catching up with Ellie and the gang again.  Who knows what they'll be up to... probably no good... but at least they get to do it in New Zealand and Australia!  Yep, the next book will take place in both of these incredible locations, so you already know this is going to get crazy good!!!

Well, that's all for now!  I hope everyone has a safe and enjoyable Halloween.  And I'll catch up with you all again soon!!
Posted by Wendy Lohr at 2:31 PM No comments: