A somber, alien twist for today's Writing Prompt. This and other writing prompts can be found at Writers Write. 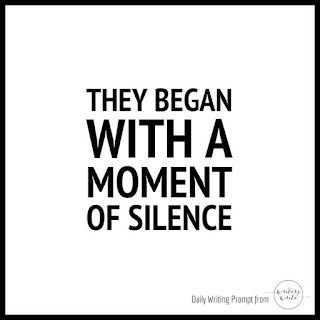 They began with a moment of silence, honoring those that were no longer among the living.  So many lives lost to protect those that still remained, a sacrifice that would not be forgotten for many generations to come.  And it was not a sacrifice in vain.  On this day, the living were celebrating their newfound freedom.

Freedom from tyranny and oppression.

Freedom to have opinions and ideas.

Freedom to create without censure or fear.

Freedom to explore their world as well as the many worlds beyond.

As the moment of silence came to a close, haunting voices rose in unison, singing the new beginning for their species... a beginning that would have never been without the sacrifices of the brave, fearless, and determined warriors being honored this day.  Warriors of the unassuming Naavu race who were now the sole surviving species on their beloved planet, Renvost.

The silence was for the warriors, the singing for the living, and with hope and imagination, their race would one day fulfill the long-held hopes and dreams of all those who had come before them.