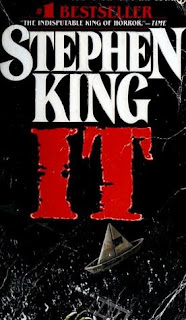 *This review can also be found on my Goodreads account.

So, this was my first time reading this book. I've been slowly trying to work my way through Stephen King's massive array of novels and since IT was just remade and both Chapters are now out, I felt it was time to pick this book up and see how different it was from the movies.

As always, Hollywood didn't come close to capturing the entire essence of the novel, but I will admit they did a fair job of getting closer than some adaptations they've done of King's novels in the past. I fell in love with Mike Hanlon's character and actually wished I could have read more from his perspective alone. But all of the characters had their unique perspectives to lend to the story and they were all fascinating in their own respects.

One of the things I wasn't sure I'd like but actually found to be a perfect way to tell this story was the back and forth between the years 1957-58 and 1984-85. It was done in such a way that didn't give me heartburn trying to keep up and it was laid out to complement what happened in the past to what they were remembering and what was happening in the present. So if this is something that normally bothers you, give it a chance as it really does make sense the way it's told and how various events are revealed.

As always, every time I read a Stephen King novel, I'm amazed at the depth of character that he creates. He truly knows the human condition better than most authors I've read and is able to capture the innocence of youth, the pangs of adolescence, the struggles, hopes, fears, triumphs, and failures that make us human. And the amount of details woven in to create the scenes, the atmosphere, the cultures of the time periods... all of this makes for a well-developed, truly immersive experience.

As for IT... I actually wish Hollywood would have stuck with the novel so the audience could see the true terror this being could create. The various shapes it took, calling on the imaginations and fears of the children, were so varied and grotesque, it would have made for some amazing scenes within the movies. And then the hold IT had on Derry itself... how the adults responded to the spikes in violence and tragedies, was scary in and of itself. But, I guess they had to be selective and of course, make their own changes.

In all, the book was amazing, the characters so real, and the descriptions so vivid, that I felt as though I was right alongside them as they triumphed, failed, and triumphed again in their struggles not just with IT but with their every day lives. If you haven't had a chance to read this yet, I would highly recommend it!
Posted by Wendy Lohr at 10:22 AM