TBR Pile #7: Who in the World is Carmen Sandiego? 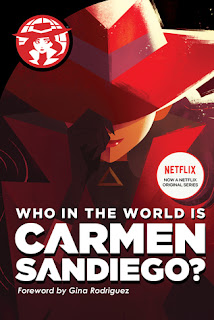 *This review can also be found on my Goodreads account.

Adventure, capers, and crime. Even though this is a relatively short book, it was packed full of these three things! And as skeptical as I was at first about reading this, I was surprised at how much I actually enjoyed it.

I will be the first to admit that even though I grew up at the time when Carmen Sandiego was first making her appearance in our world, I didn't have any interest in following her exploits or trying to find her. I had other interests as I entered middle and high school, but I was aware of the Carmen Sandiego phenomenon. So receiving this book for Christmas one year had me slightly puzzled and I just shrugged and stuck it on my TBR Pile to read at a later date.

Now, two years later, I'm finally getting around to it and kind of regret I waited so long to see what the hype was all about! This book actually is Carmen's origin story and explains where she's from and how she was raised to believe that stealing was a good thing, a fun and exciting game that she wanted to be the best at. And it was hard not to be fondly amused at her antics to be the best little thief in the world, but it was also kind of sad that she was doing it as a way to be close to her quirky 'family' of master thieves.

As the story progresses, it's revealed how she manages to escape (the first time) the island she's called home her entire life, only to learn what her 'family' is really all about. And that lesson is a hard one for her to swallow. But, after being retrieved and taken back to the island, she realizes what she needs to do and, with the help of a voice on the other end of a stolen cell phone that goes by the name of Player, she slowly discovers that she actually can put her criminal talents to good use.

It's a thrill-seeking, fast-paced novel that kept me turning the pages to find out what was going to happen next. The only reason I didn't rate it higher (and the reason is more personal than anything to do with the storyline) is that it is written at a more basic reading level. The book is really meant for a younger audience of readers, but is definitely a fun read for adults as well. I just believe that most young readers would not have had any trouble if it had been written at a bit higher level. But this is just a personal opinion and by no means should detract from anyone wanting to read this book!

In all, a great, fun, and thrilling read for any age. I know this is now a Netflix series and after reading this book, I'll definitely have to check it out! So, whether you were a Carmen Sandiego fan when you were a kid, never followed her, or are just discovering her, this is a great book to check out if you're even the least bit curious!
Posted by Wendy Lohr at 7:13 AM

Email ThisBlogThis!Share to TwitterShare to FacebookShare to Pinterest
Labels: 4-Stars, author, review, Who in the World is Carmen Sandiego