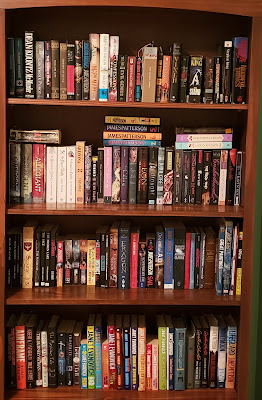 Welcome to my To Be Read Pile... books that have been languishing on my bookshelf for far too long! My goal with this page is to slowly work my way through all of the books listed below (not in any particular order), providing my thoughts on each one in a series of TBR Pile posts.

The books that have been read and posted about will be highlighted with links to their specific post. If a book wasn't finished (either I couldn't stand it or just couldn't get into it), it will have DNF marked next to it instead of a link to a post. Oh, and if I just can't resist the urge and end up buying more books before all of these are read, I'll add the new ones to the list here!

This is more for me than anything, but if my thoughts/reviews on these books help you to decide whether to read them or not, bonus! So feel free to leave comments here or on specific posts as I'm always happy to hear from you. And Happy Reading!